You might, like many of us, have some goals or dreams, personally or professionally, that you have yet to fulfill. Sometimes you feel stuck in a rut and wanting more. Often the feeling is one that is self-perpetuating as you lose enthusiasm and the energy to get out of it. Sometimes without taking action to dig yourself out you can end up burnt out or depressed.

Action is the key.

One action that I’m advocating for today is to join into the local, national, or global conversation that it happening around the goals you have both personally and professionally. I believe that participating in, rather than listening in, is a sure fire way to pull out of a rut, reenergize yourself, and getting your brain to work creatively again.

Conversations happen in many ways and in many places: in the open, behind closed doors, in meetings, over the phone, email, on message boards, and in the media. Some of those are available to you and some of those you have to force your way in.

I have an example of the latter from my job. Our company had started working on a web portal for our clients which is an idea I had long advocated for. For reasons I do not know (I was the only person at the company with a technical background) I was not included in almost any of the discussions leading up to the development nor any of the discussions during the development process. The development was outsourced and, while there technically was one person leading the project, in reality there were eight different people who were trying to control the project.

If the project was a human I imagine it felt like this: 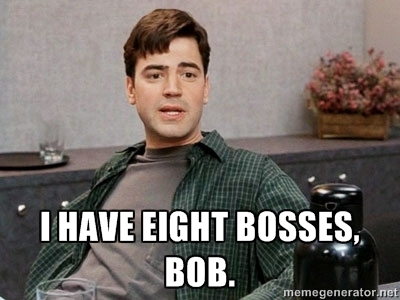 When the portal was finally launched it was something that neither our internal people nor our clients wanted to use. In fact, only one person logged in and interacted with the software in the first four or five months it was live. Obviously there was a problem.

I took this problem to be an opportunity and forced myself into the conversation. The first step was to write up nine pages on what I thought the issues were and ways to improve them (basically it all boiled down to vision and software being a tool that people use to solve a problem). I followed that up coding a different vision of the portal (in 1/20 of the time and for 1/1000 of the cost of the original). I demoed that and also created a forty slide presentation that highlighted the ways it would streamline things for our staff and would scale as we grew.

It was some of the best work I had done in a long time. It had dragged me out of the rut I had been in at the job and got my brain firing on all cylinders. New ideas were popping up as I was trying to sleep and I even had two dreams about it.

What brought me to that point was that I felt that you can only be ignored for so long. I responded by taking voicing my opinions and taking a lot of action. I did not see a downside. By forcing yourself into the conversation the worst case scenario is that you build up a body of work that you can repurpose into a blog, book, podcast, product, or company.

On that project, while I think I did get some people to ask the questions that should have been asked at the beginning, all of my efforts and suggestions were generally acknowledged but not acted upon. For whatever reasons the powers that be decided to continue down the path they were on.

It was not the wasted effort it seems to be. Out of it I have come up with a great idea for a company, an idea for a book, learned Ruby on Rails, and had some amazing discussions with some of my colleagues about the future of the industry.

This blog is another way that I am joining in a conversation. I am using it as a way to reach out to potential customers for StartOpz. I believe those people to be either entrepreneurs or employees at startups or small businesses. They are interested in starting and scaling their efforts to build a successful business. Hopefully some of my posts help them do that in some way. I know I have already learned a lot from them.

When things settle down a bit I also hope to get further engaged in the conversations around the various issues that are important to me and to find ways to help whether that be through charity or more hands-on efforts.

Words can be leveraged more than money can ever be. They are powerful in that they can incite action in others and that other people can pass them on thus reaching more people that you have ever met in your life.

The conversation is happening right now on the web on sites like Twitter and Reddit. It is happening on blogs (write posts and leave comments), in books (write one and self-publish), and in emails (find people in your field of interest and just write to them). It is happening at conferences around the world and at your local coffee shop.

Talking about what you do and what you want to do will get you excited and keep you excited about the efforts you are making to reach your goals. It will incite the action you need to get out of a rut or avoid it completely. It will keep you feeling alive.