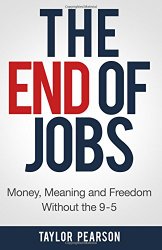 When I first heard about Taylor Pearson’s new book, The End of Jobs, I was worried that he had written the book that I have been researching. What I found was instead a practical book that outlines how the employment equation is changing, gives examples of people that are at the front of the wave of change, and provides a framework to adapt to the new job paradigm.

Two books that The End of Jobs reminded me of are Escape from Cubicle Nation and The $100 Startup. One of the people interviewed in The End of Jobs was Dan Norris who recently released a book titled The 7-Day Startup. This book is a good supplement to those but with more of a focus on the digital nomad aspect of the new world of business.

The overarching point the book makes is that now, more than ever before, you have the ability to design the lifestyle you want and that entrepreneurship is the avenue to do that. Increasingly it will be the only avenue to do that due to advances in technology and a changing business landscape.

I like his definition of entrepreneurship and a job:

“Entrepreneurship is connecting, creating, and inventing systems–be they businesses, people, ideas, or processes.

A job is the act of following the operating system someone else created.”

He goes on to lay out many of the skills (sales and marketing among them) needed to succeed in the world without jobs that he is envisioning.

There is a particular argument that Taylor laid out that struct me as very insightful if it turns out to be true. He said:

“We aren’t going through a global recession–we’re transitioning between two distinct economic periods.”

I really cannot say that theory is true or not but I am in absolute agreement that we all should prepare as if it is. I have seen a lot of the examples he has laid out with my own eyes as I think most people have. Jobs are less secure and entrepreneurial skills will help you survive.

If I had one complaint about the book is that I think some of his arguments seemed to jump from point to point and could have been fleshed out a bit more (while I’m a big fan of Warren Buffett I was lost about how value investing tied in) or benefited from better examples. In particular the example involving Morgan Stanley and IBM and a bond sale felt a bit tenuous. However he quickly bounced back with a wonderful thought exercise about your local community out of which I readily understood that: entrepreneurship > knowledge > capital.

One other quirk, and I don’t know if this is due to his subjects choosing to be anonymous or the writing style, but I would have liked to hear more detail about the people and their businesses that he used as examples.

One reason this book was particularly interesting to me, and might not necessarily be a factor for others, is that I feel like I know Taylor and many of the people featured in the book due to having listened to each episode of the Tropical MBA podcast over the past five years.

Even without that background I think many people yearning for more freedom or dreaming of making the jump from job to entrepreneur will enjoy the The End of Jobs. It is a quick and inspirational read.